Capt. William J. Rysam (1737-1809) set out from his native Wales, England and came to America as a sailor, eventually becoming a captain of his own ship. He arrived in Sag Harbor around 1778 with his five daughters after his wife, Ursula Pierce, died shortly after giving birth to their youngest daughter.

A successful ship builder, commercial businessman in trading, Captain Rysam held a firm belief that all children should have the opportunity to be educated. He enrolled his five daughters in the co-educational Clinton Academy in East Hampton. Upon his death, he bequeathed the town a $500 fund in 1813, his will stipulating that the trustees were to apply the interest generated from it to “the schooling of poor children whose parents were not able to pay for such tuition,” according to trustee records.

Today, the East Hampton Town Trustees remain committed to Captain Rysam’s desire to see that all children have an education. The Trustees are dedicated to assisting East Hampton’s graduating high school students with their college tuition expenses.

Applicants are required to submit an essay to the trustees, in which they describe their knowledge of the history and current relevance of the East Hampton Town Trustees as the stewards of the town’s natural environment and resources. Applicants are also asked how the Trustees responsibilities contribute to the community, themselves and their families.

The Trustees believe the future of our community leadership, country, and world, depend upon our young people having the opportunity to explore, learn, and develop their talents through their pursuit of higher education. 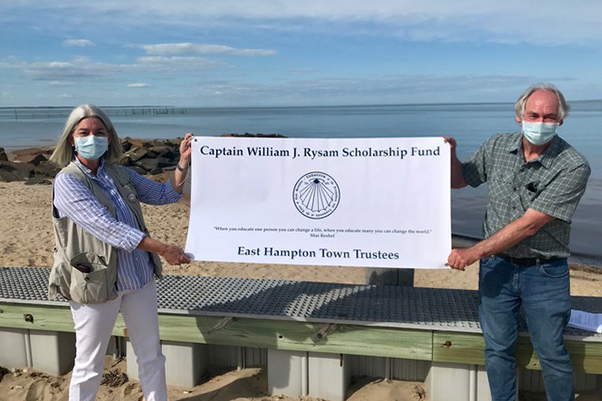